Troy McClure wrote: ↑Sat May 07, 2022 11:26 pm Gaudreau had Flames fans chanting MVP as the regular season wore down. They're about to go back to calling for him to be gone. He's been invisible in this series.

Some team this summer will give him a mega contract and will regret it by February.

I wouldn't get too cocky just yet.

Mostly I'm cocky because the Flames look like a team of idiots. They're spending half their energy worrying about crap after whistles.
I got a ranch in downtown Dallas/I buy diamonds by the ton/Chase cuties in my Cadillac/Drill oil wells just for fun/But when it comes to boots, I need a deal/That will fit me right, toe to heel/So I get my boots at Western Warehouse.
Top

Troy McClure wrote: ↑Sun May 08, 2022 1:01 am
Mostly I'm cocky because the Flames look like a team of idiots. They're spending half their energy worrying about crap after whistles.

Yup. Although I don't know if they got punished for it all that much. Refs were determined to always make it even.
Top

See I told you guys that being pesky would work eventually 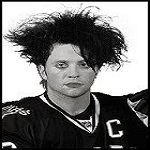 I had buddies over for UFC 274, so I had the game on with no sound on a laptop positioned at the bottom left of the TV:

-Based on what I’ve seen called in other games these playoffs, I thought that first Flames goal was goaltender interference.

-Those big ‘ol Texas titties behind Bowness were indeed distracting, and even got “Rick Bowness” trending on Twitter LOL.

-Pavs is *fargin'* money, and I still can’t believe that we’ve scored an ENG two games in a row.

-Otter has a very thick and large neck.