Senators' Chabot with the traditional 8x8 contract. I'm not so shocked as he will be the #1 D-man of this wrecked train for the years to come and that's the price to have to pay for such players given their role, age/maturity and production.

Now that will be used as a basis for a Heiskanen extension for which I root all over the place.
Top

That seems low these days.
Winamp - it really whips the llama's ass.
Top

The third jersey horror show continues. After the Oilers, here's the Blues with the exhumation of their hideous 90's jersey

The helmet not matching the jersey is disturbing.
I got a ranch in downtown Dallas/I buy diamonds by the ton/Chase cuties in my Cadillac/Drill oil wells just for fun/But when it comes to boots, I need a deal/That will fit me right, toe to heel/So I get my boots at Western Warehouse.
Top

It could be worse: 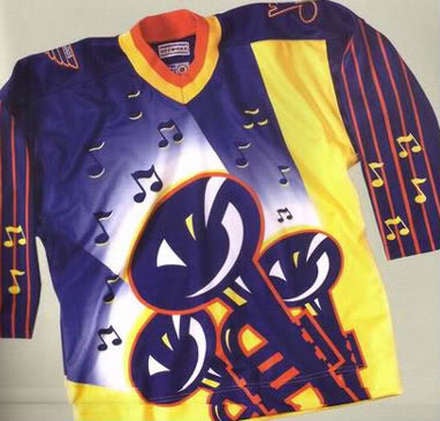 OK, this is just next-level wizardry for 41 goals and 92 points from a center:

That illustrates perfectly why players like Rantanen, Laine, Point, Marner & Co. are/were in those contract disputes.

They want to have a bridge-deal at a very high value in the last year, so that they can expect a high QO based on that and still have the RFA status (however not eligible for arbitration). After the bridge deal, they can claim a higher level of money, given the cap space increase and eventual other comparables. In opposite to that, teams want to sign them with longer terms, hence with "lower" amount money per year, leading them to UFA status at the end of the contract and have a better contract amount vs. cap space ratio in the middle-term/long-term.

There is also all the no-trade/no-movement clauses and bonuses that come into play as well.
Top

How does Tampa have any cap room?

Expect the owners to push to remove the qualifying offer being based on the final year of salary in the previous contract from the next CBA.
Winamp - it really whips the llama's ass.
Top

And Tkackuk Jr. with the 3-year bridge deal as well. Dominoes are falling, Rantanen is next. After that, the Jets still need to re-sign Connor and find a way to get rid of Laine.
Top

I would just like to go on record that I totes predicted like 2-3 years ago that Kari giving up 3 goals a game to Laine would single-handedly bankrupt the Jets.
Top

1. “He’s trying to figure it out if he’s interested, and we’re doing the same.”

One open-to-interpretation comment from Mike Babcock is all it takes.

So, is Babcock simply trying to light a fire under an accomplished 1,065-game NHL veteran who accepted the league minimum to return to his hometown and try, at age 36, to finally realize a championship dream that has eluded him for 16 seasons?

Is he using Spezza’s situation to motivate the tryouts actually on the bubble?

Or is the coach actually hesitant to bank on a fading 90-point superstar to fill a very specific checking role? Kill penalties, win draws, forecheck hard, get off, and get used to skating (hard!) fewer than 10 minutes a night.

What’s curious is that no one thought Spezza’s 4C job would be in doubt.

Frederik Gauthier — God love the guy — isn’t exactly the type of player we’d describe as “difficult to replace.” Spezza’s experience and leadership is supposed to offset the losses of Patrick Marleau and Ron Hainsey, a couple of other guys who know what it’s like to see Round 4 of the playoffs. Spezza’s openness to filling in on the wing and ability to make plays on the second power-play unit or contribute a little higher up the lineup in case of emergency were seen as benefits.

GM Kyle Dubas said Spezza was accepting a reduced role with eyes wide open, and the player began training at the Leafs facility weeks ahead of camp, bonding with some of the young players on and off the ice.

So… now his interest and/or the Leafs’ interest is already up for debate?

*I understand that I may withdraw my consent at any time.

Working in Spezza’s favour is that no NHLer who took at least 135 faceoffs last season had more success than the former Dallas Star. He won 58.6 per cent of his draws (470 for 807), yet took only three shorthanded faceoffs.

As evidenced by his effort thus far at camp, the Gaut knows full well he’s fighting for a job.

Babcock’s comments on Spezza perk the ears because of the coach’s history with veterans in decline.

“It’s nothing personal, but he’s a tough guy to play for if you’re a veteran. If you’re a young guy, I think it’s great because of the accountability. If you don’t play [properly], you’re not going to play,” Chris Chelios said in 2017. “But no matter what I did — I tried so hard to win his heart over and I just couldn’t.

“It took all those years to find a coach that — I wouldn’t say not like me, but just didn’t want me in the lineup.”

To be fair, whatever lineup Babcock decides to ice needs to be his call. It’s not a stretch to believe the coach’s own fate rests with how far he can take the group.

As for what Spezza might be thinking, we spoke to another veteran UFA who joined a Babcock team anticipating a certain role only to find himself healthy-scratched repeatedly.

“You guys [in the media] have had some good thoughts on why that might be the case,” he said.

“Obviously, as a player, you try to figure out what you can do to earn that trust. It didn’t seem like it was there from before training camp, let alone after that – which is not what I expected coming in. It was a surprise to come into that situation. What the reasons are, you’d probably have to ask others.”

Babcock is a wildly overrated coach. All of his success came from basically having an entire team of Hall of Famers doing Hall of Famer things with the hockey.
Winamp - it really whips the llama's ass.
Top

I’m on Spezza’s side here. Just because.
Top

I like how the article mentions how great at faceoffs he is but that he had no PK time. Well that would be because he's not a defensive player. So his value as a fourth liner was always basically nothing.
Top

I just think it's hilarious that he scratched Mike Modano to keep him stuck at 1499 games.
Top

Did he really scratch him at the 1499-mark? I don't recall well. I know he was injured in Detroit but I don't remember exactly at what moment of the season.
Top

How virile is Spezza that he fires swords from his bow?
Top

Users browsing this forum: No registered users and 11 guests